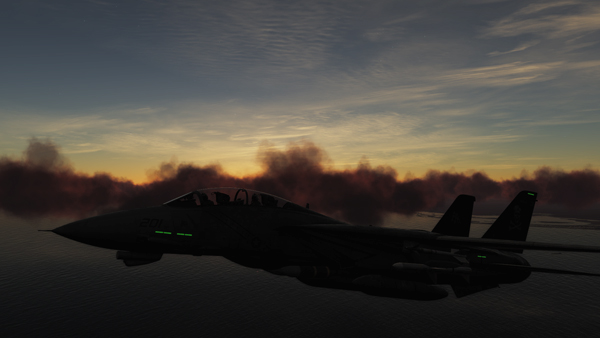 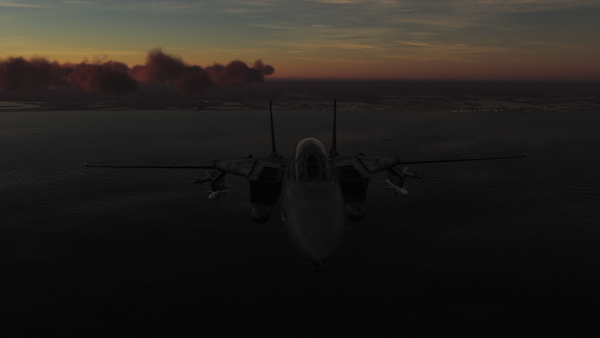 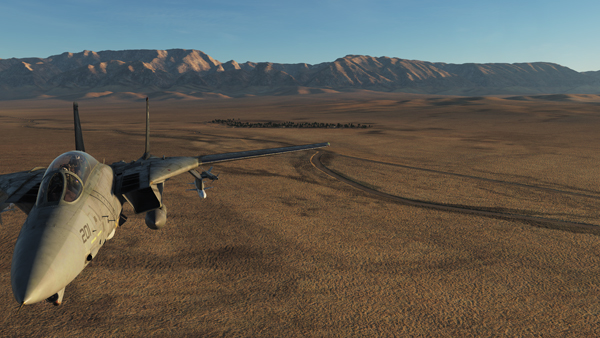 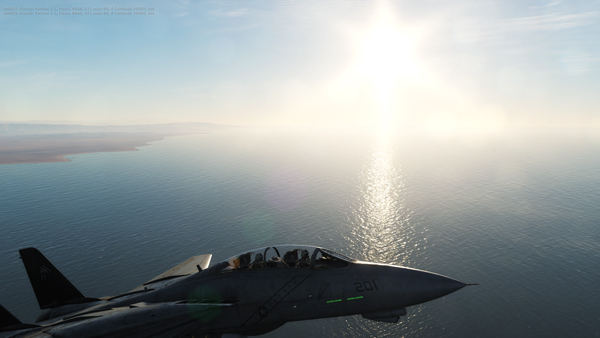 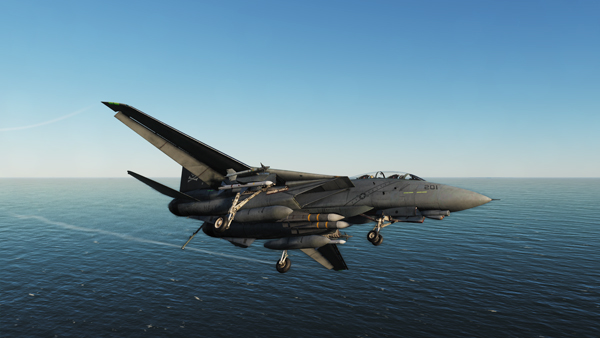 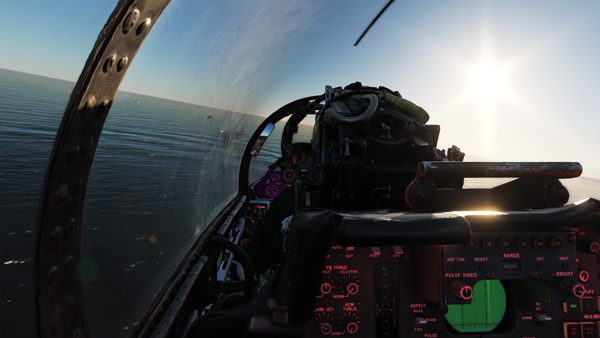 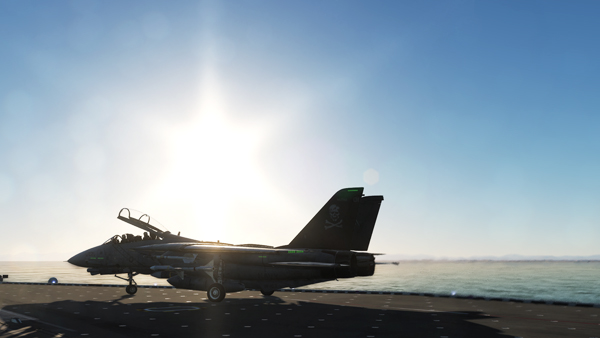 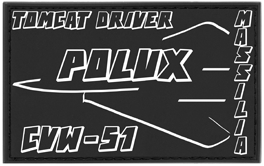 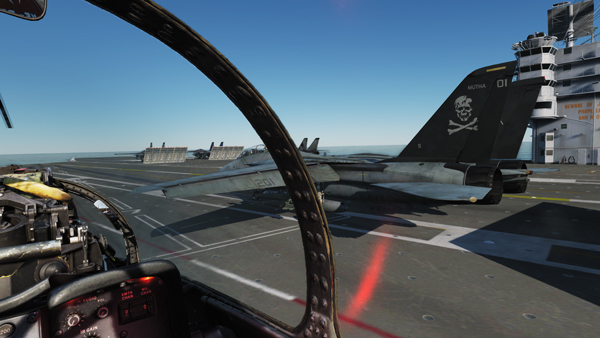 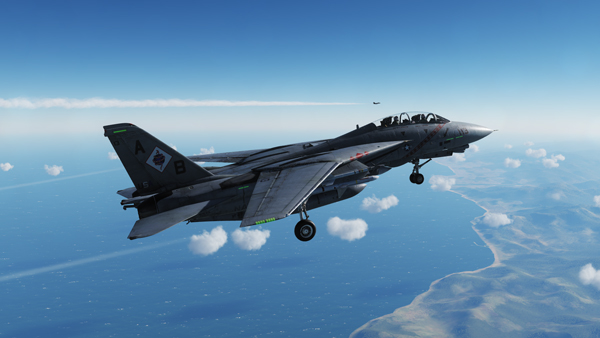 Half a year has now passed since the release of the F-14! It’s time to give you an update on our current development status, priorities and what the future holds in store for the F-14.

First of all, thank you so much for the incredible support! The feedback we got from you was nothing short of overwhelming, from the many praiseful words you’ve bestowed on us to the incredibly committed and detailed feedback and criticism: thank you so much. Being part of this community has been the experience of a lifetime, and all of the hardships of development have been worth it. Let’s go over some of our current priorities and development changes. Recent shipped changes are of course included in the patch log as always, but just to recap, here are the changelogs from the past three patches:

Generally, we are currently still prioritizing major bug fixes. This is now slowly changing and we’ve started shifting focus back on the new additions to the module, as well as the introduction of the remaining features and content.

Making sure that we’ve corrected most of the major issues and given ourselves a good starting point for the addition of new features has been an integral part of our F-14 post-launch sustainment plan. One critical part to this is to make sure that we never try and keep a game-breaking or immersion breaking bug in the aircraft for too long. Your experience matters to us- and prioritizing this over new features will keep the road forward smooth. Hopefully, we’ve now reached a point where we can begin to introduce new features with confidence and with minimal introduction of new issues, so that the F-14 continues to feel like a stable product.

This feature is rapidly nearing completion, and we are now in the final phase of its development. We will make a separate update on this feature before release. This has been a very challenging task, but we believe we’ve found a good way to make JESTER operate the LANTIRN both quite independently, but also at the pilot’s command and disposal. Weaving this functionality together in an immersive and realistic way has been integral to our efforts.

One core component to this effort has been to make a new human emulation system for the way JESTER will actually utilize the LANTIRN controls. This includes simulating the way a human would search an area and avoiding any sort of robotic jankiness. This has proven to be a challenging endeavour. Search patterns that make sense and feel authentic have been developed as part of this effort.

Certainly, communication with JESTER is key to achieve your goals. The player will be able to tell JESTER to look at either a Waypoint, coordinates or a map marker, and command the area and size of the area to search in. You will be able to instruct JESTER to e.g. prioritize SAMs or armor or ships - and much more. All in all, we hope we’ve found an appropriately immersive and functional way to integrate JESTER Lantirn, and we hope you’ll enjoy this feature once it launches. Currently, the last remaining items are to record the remaining voice lines required for this and run the feature through a few final cycles of testing.

This feature has undergone significant refactoring internally. As some may recall, it was disabled just prior to release as it was not very reliable and there were specific mathematical issues we had difficulty solving. We decided to completely rewrite this feature as part of a partial refactoring of various radar code.

Some more work and a lot of testing is still required, however, if all goes well this should be available in open beta by early November. This will add TWS attack steering (steering tee on HUD/VDI/DDD/TID) to the centroid of the targets, as well as aim the TWS radar search pattern in the correct direction to maximise target coverage. Re-developing this feature has been a major development effort and we’ll be pleased to finally get it in your hands.

JESTER has already received a couple updates, like the recently introduced new elevation function. Further updates are in progress, including improved IFF and close combat SA.

We’re also working on new energy calls as well as suggestions for the player when to switch to the Pilot Acquisition Modes. This will make him sound less “unable”, and hopefully also teach the player better about the limits of the AWG-9, as these suggestions will come in situations when it is hard for the RIO to keep up with the radar, which is frequently the case at close range.

We’re continuing to work closely with the multiplayer PvP and SP community to find new and useful ways to increase Jester’s usability and utility. It goes without mention that many smaller tweaks to functionality, logic and other elements are still ahead of us.

We’re pleased to note that we’re finally able to use the new missile API to control the AIM-54 active mode from the F-14!

These changes are currently live in our experimental build branches, and we are currently testing to ensure that everything works as it should. Here is a brief summary of what these changes include. We’ll delve into more depth once this feature is ready to ship:


This also means the in-flight missiles with TWS will no longer go active if tracking is lost, the F-14 is destroyed, the radar is disabled (..etc), before 16s TTI. However, the WCS can keep a track file stored for up to 2 minutes (for targets under missile attack) and send an active signal to the Phoenix pointing it into the target’s likely position, if the track has not updated for a certain time.

We’ll continue testing the Phoenix and ensuring that it behaves as accurately to the real thing as possible.

The art team has been prioritizing the completion of some of the bigger workstreams that currently remain for this part of the product. These include the completion of the Forrestal class carriers (yes- still shipping for free for all!), the F-14A engine nacelles, nozzles and other adjustments, the A-6 (and future KA-6), and much more.

Some of the critical elements still outstanding that are due to ship very soon include the digital EGIT, various minor corrections and fixes, correcting the custom cockpit option, new afterburners, and several other high priority items. The Forrestal class carriers will launch later this year. Get ready to land on a real postage stamp!

Some of the features that will launch in Q4 include;

The F-14B flight model is also nearing its completion. We’ve created an entirely new testing system that supersedes our previous automated testing. This will allow us to more effectively tune and tweak the remaining elements of the model. Our new testing framework has quicker turnaround times and delivers more detailed metrics.. We will release an overview on the flight model tuning once we are done, so everyone can follow the changes that we made and to better understand them.

Not only during development, but also over the past half year our SMEs have been extremely active in giving us feedback almost on a daily basis, which at this point requires a massive thank you from us, to them. It is not so common that a person would devote so much free time and passion to a project like ours, and we feel extremely blessed. We believe that getting so much devoted and dedicated pilot feedback is absolutely critical to our development process, and we cannot stress enough how lucky we are to have such incredible SMEs.

We are close to completing a major refactoring of the way inputs are handled between the front and rear cockpits. This is a significant change to our codebase, and will solve a few key issues, as well as allow for a cleaner delineation between pilot and RIO inputs.

This refactoring will solve the key and critical issue of Jester not re-activating after a player disconnects. Further, it will disallow any RIO keyboard inputs from the Pilot’s cockpit. For this reason, we’re keeping this feature entirely in our experimental branch until JESTER LANTIRN is fully implemented; so as to not remove the utility of the current SP LANTIRN modification, which will stop working.

While we understand that some of you have become reliant on this modification; we are sticking to our design principles of handling all RIO functionality through JESTER or through multicrew.

Work on the -B campaign is underway and it is slated for completion by the end of Q4. It is set in the late 80s, around the fall of the Berlin Wall and tries to recapture a realistic scenario of what could have happened.

Though fictional, it will be kept close to missions that were realistic to be flown by Tomcat pilots at the time and is meant to portray the various tasks a real Tomcat pilot and RIO would have found themselves in. The campaign will revolve more heavily around air to air, but if you want to get a feel for what it will be like (approximately), you can try the quickstart mission “Watching the Devildog”.

This first campaign will release for the Caucasus theatre, and will eventually include a Co-Op version.

Development on the F-14A is progressing in parallel to the finishing work on the F-14B’s flight model. Current focus is on building a new engine model for the P&W TF-30 engines; which have a number of unique characteristics and piloting considerations. We are closely conferring with our SME’s, who flew -As for many years on getting an appropriate grasp of these engines and the impact they had on the aircraft.

Overall, the work on the -A is progressing at an appropriate pace and focused on several key areas, namely:

We’ll keep the update short and sweet on the Viggen as there’s been way too much talk, and not enough walk. It will launch out of EA by the end of Q4. The Campaign is now finished, and is undergoing testing. Other features that will be included in the final (1.0RC) version of the Viggen include;


Beyond RC1 for the Viggen; we will be focused on backporting features developed for the F-14. These include new afterburners, effects, and other elements currently in development for the F-14.

The Viggen is not a second rate citizen for us. Our priorities are now aligned so as to launch these remaining items without question later this year. Our sincere apologies for it taking longer than expected!


There is more that we’ve not touched on in this update (e.g. J-35 AI) - but we’ll be sounding off through updates and through another development update throughout Q4. Stay tuned.

As always, thank you for all of your support. Your patience, passion, persistence and commitment is what makes us tick. Thank you for letting us be a part of this community and letting us develop your favourite aircraft.