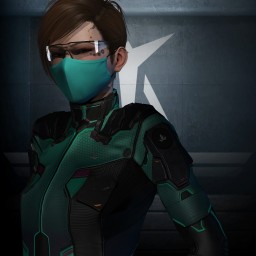 - Better way to track a player. Bounty Hunting players is irrelevant nowadays because we don't know where the player is located in real life, which brings a problem : Timezones. We can be running after a player that never plays when we actually log in.

So, here are the additions that could be nice and practical:


* Better wing system
Four players is not enough at all.

- Add the ability to create multiple wings. Like this :
Player A, commander, creates a Commanding Wing, with wing leaders in it.
Player B C and D have wings of 4.
Player A can see everyone on the radar as BLUE.
Player A can broadcast informations to all wings.

Player A would, thus, have to organize the fight rather than take part in it. He would be the eyes of the wings.

-Maybe we could setup in wing options different colours. Like, wing 1 = Blue, Wing 2 = Orange, Wing 3 = Pink
So whenever you become wing commander, you see your whole fleet on the radar properly and can visualize what's happening.

Basically, a Data Link system like in modern jets.

Further !
- Add a small system of information broadcast. Wing Commander would have access to "strategic beacons", that could be dropped like mines. They would appear on the radar as symbols such as a "target symbol", or a "shield", which would appear on the fleet's radar and would translate as "Attack this target", "Defend this ally".
The fact that this is a dropped beacon would give the opportunity to ennemies to attack and disrupt communications.
Allies would have to get situational awareness to know what ship was designated by the fix mine.